The Scholarly Orphans project explores an institution driven approach to discover, capture, and archive scholarly artifacts that researchers deposit in productivity web portals as a means to collaborate and communicate with their peers. The project is funded by the Andrew W. Mellon Foundation and is a collaboration between the Prototyping Team of the Los Alamos National Laboratory and the Web Science and Digital Library Research Group at Old Dominion University.

myresearch.institute and scholarlyorphans.org are components in a limited-term experiment conducted as part of the Scholarly Orphans project. The experiment is set up as an automated pipeline that is coordinated by an institutional orchestrator process, as depicted below. It was started on August 1 2018 and will be terminated on March 31 2020. It is the intention to maintain the metadata that was collected in the course of the experiment, in which case it will be openly shared via platforms such as OSF, zenodo, or FigShare. It is the intention to discard the content that was collected during the experiment (WARC files and Mementos, see below). 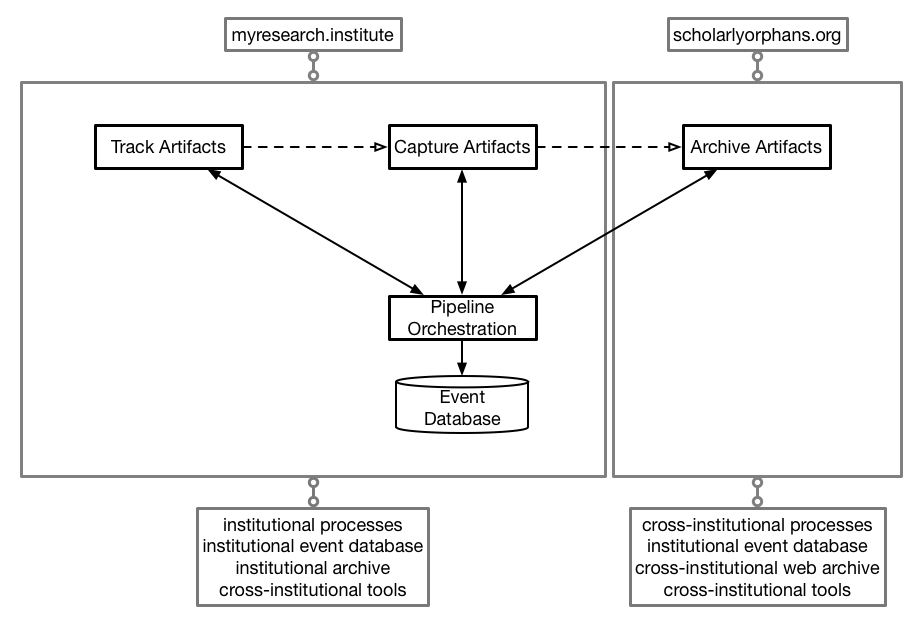 The modules in the pipeline are as follows:

myresearch.institute is a fictive research institution that was created to illustrate the process described above. The researchers that fictively work at myresearch.institute are actual researchers that work at real institutions and were selected because they have a diverse and active web presence. We hope these researchers do not take issue with being selected for this limited-term experiment but rather will enjoy the integrated view of their web activities as presented by the myresearch.institute portal. Once the experiment is terminated the portal will be discontinued. It is the intention to maintain and publicly share the metadata that it presented.

scholarlyorphans.org is an experimental web archive in which all artifacts that are captured in the course of the experiment are ingested and from which they can be replayed using a web browser. We hope that the web portals from which these artifacts are captured will not take issue with being included in this limited-term experiment but rather will appreciate the advances in web archiving that the project made as a result of their inclusion, see the Memento Tracer framework. Once the experiment is terminated, the web archive will be discontinued. It is the intention to discard the WARC files that were ingested into the web archive as well as the Mementos that resulted from ingestion.

Contributors to the experiment are: